Seyi Gesinde takes a look at how Nigeria benefits as Vice President Yemi Osinbajo, SAN, visits the Socialist Republic of Vietnam, leading Nigeria’s drive to bolster joint economic ties, positing that the Vice President’s trip to the Southeastern Asian nation has opened a new vista of opportunity to boost Nigeria’s exports, among other gains.

This is a strategic return visit knowing the former Deputy Prime Minister of Vietnam, Vuong Hue, had, in October 2019, visited Nigeria, where he had a session with Vice President Osinbajo who led senior government officials in a meeting between both countries with members of Nigerian-Vietnam Business Association in attendance.

Reviewing Nigeria-Vietnam relations, former Deputy PM Vuong Hue, who led his country’s delegation to Abuja, in the company of senior Vietnamese government officials and businessmen, said Nigeria is Vietnam’s largest trading partner in Africa, as the trade between both countries which stood at $280 million in 2014 had grown to over $500 million in 2019. It was on this premise that the joint teams of Nigeria-Vietnam government representatives further solidified their bilateral relations to boost trade.

It is also worth noting that Prof Osinbajo, who recently arrived from a similar trip to Canada after over a decade a Nigerian leader had visited, is also recording another first being the first time a rated Nigerian government leader would be visiting after President Olusegun Obasanjo, in 2005 visited the Southeast Asian country, who has maintained long-standing diplomatic relations with Nigeria since 1976.

Prof Osinbajo’s visit to Vietnam during this period Nigeria is reshaping its national economic plans to favour local productions is a good idea, as much as the exportation of its products will fetch more foreign earnings while reducing costs locally to help Nigerians’ personal economies, even as the country is breaking away from its economy intrinsically tied to the performance of the world crude oil market which often necessitates inflation enforced by competing market forces.

Recalled Nigeria, had, in the past benefitted from the formerly buoyant crude market, but the oil price which plunged between mid-2014 and early 2016, when the global economy faced one of the largest oil price declines in modern history, later forced Nigeria into recession after its oil revenues had collapsed by a huge $100 billion between 2015 and 2017, reigned in only by OPEC’s agreement to lower output by 1.2 million barrels per day. The national economy was plagued with a sluggish recovery until later the market witnessed a slow rebound in oil prices.

Now that experts have since warned that oil demand could reach a climax in just 30 years, the pressure is on Nigeria to fast-track its economic diversification strategies, hence, the initiative of the Vice President Osinbajo-led National Economic Council (NEC) to work around an ambitious zero-oil agenda launched by the government, which NEC said would increase total non-oil government revenues by fivefold over a currently unspecified timeline is timely and laudable.

In projection, what it means is that it will see Nigeria’s external markets increase from $5 billion to $25 billion. Exports are the major target, with the government determined to boost key crops such as rice, wheat, corn, palm oil, rubber, sugar and soya beans. This is where the need to further bolster trade between Nigeria and Vietnam becomes so important at this prime time, knowing full well that the Southeastern Asian country depends on these products coming from Africa, especially Nigeria. 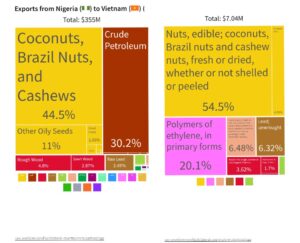 For instance, in 2020, Nigeria’s exports to Vietnam were summed up to $355 million. And according to the Observatory of Economic Complexity (OEC), the world’s leading data visualization tool for international trade data, the main products that Nigeria exported to Vietnam were “Coconuts, Brazil Nuts, and Cashews ($158 million), Crude Petroleum ($107 million), and Other Oily Seeds ($39.2 million). The data shows that during the last 24 years, the exports of Nigeria to Vietnam have increased at an annualized rate of 31.5%, from $500k in 1996 to $355 million in 2020. 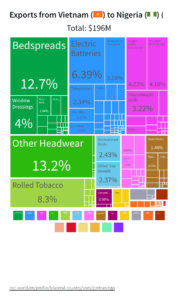 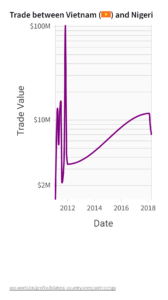 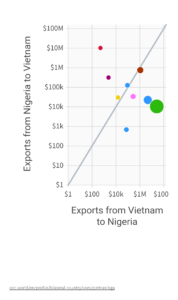 With the figures here presented, it suffices to say that Nigeria has to intensify its foreign trade with Vietnam as looking through the comparative advantage, the country is on an upward trajectory, in which it is believed that the visit of Prof Osinbajo to Vietnam will go a long way to expand the business reach of Vietnam in Nigeria.

Nigeria has to push further its plans to develop the non-oil market, which the government said is progressing, and VP Osinbajo had expressed the government’s commitment towards this direction. He spoke during a session he had with some visiting Faculty Members from the Harvard Business School (HBS) led by Prof. Srikant Datar, a Professor of Business Administration, alongside a select group of Nigerian business executives in Lagos, shortly after they were returned to power in 2019, saying, “I will like to see Nigeria become an industrialized nation in the next 10 years; with a very strong middle class and most people living above the poverty line. Our policies and programmes are directed at achieving this objective.”

The government’s plan, according to experts could boost the country’s foreign reserves by $150 billion, even as Prof. Osinbajo at a separate forum, had said over $22.5 billion would be put into investments in 164 projects that will create about 500,000 new jobs under the Economic Recovery and Growth Plans (ERGP). With consistency in implementation, analysts have equally predicted that this could pull 10 million Nigerian citizens out of poverty.

In essence, Vice President Osinbajo would be setting Nigeria-Vietnam trade on the upward trajectory with his visit to the Southeastern Asian country as he meets with Vietnamese President Nguyễn Xuân Phúc; Vice President Vo Thi Aah Xuan, Prime Minister Pham Minh Chinh, other government officials and the Nigerian-Vietnam Business Association.

The high point of his visit is the witnessing of the signing of a Memorandum of Understanding (MoU) and Agreements on investment between Nigeria and Vietnam, on Monday, December 5, 2022, while Prof Osinbajo will also hold high-level diplomatic discussions with his Vietnamese counterpart, Vice President Vo Thi Aah Xuan and the Prime Minister on issues of trade, commerce, agriculture, technology and innovation. He is to also participate in a Business Forum with the Vietnamese Chamber of Commerce with representatives from both countries, among others, as disclosed by VP Osinbajo’s spokesperson, Laolu Akande, in a statement. All these are pointers to the fact that better things are underway in this bilateral relationship.

Nigerians should hope for the best with Prof Osinbajo, a stickler for homegrown economy representing, where he would be flaunting the opportunities existing in agriculture and technology in Nigeria to the Vietnamese government and business communities who are already highly interested in patronising Nigerian-made products and goods, as discussions are focused on mutual benefits from effective collaboration in particular economic sectors to deepen the friendly and trade relations of both countries.

• Describes CAN as a force for peace, unity and social justice • CAN honors Imam Abubakar Abdullahi from Barkin Ladi, Plateau State • VP urges leaders to be relentless advocates of freedom of worship, […]

Customers of Fidelity Bank are in for a treat this Valentine as the Bank has announced plans to host a delightful evening of music, fun games and delightful experiences for its customers. Tagged The Euphoria and scheduled […]