After the media last reported the whereabouts of the secretive leader of North Korea, Kim Jong Un, on April 11, there has been worldwide to speculation over ill health with concerns if he is dead alive.

The third-generation hereditary leader who came to power after his father’s death in 2011 has no clear successor and it is unclear who would lead the nuclear-armed nation in the event of his incapacitation.

Speculation includes the theory that the controversial leader is isolating for fears of the coronavirus or that he is suffering from a serious injury or illness.

While there are no credible reports saying Kim has died, the hashtag #KIMJONGUNDEAD has trended on social media in recent days.

A special train possibly belonging to the North Korean leader was spotted this week at a resort town in the country, according to satellite images reviewed by a Washington, DC-based North Korea monitoring project, 38 North.

The group said in its report on Saturday the train was parked at the “leadership station”- reserved for the use of the Kim family – in Wonsan on April 21 and April 23.

Here is what we know so far about Kim’s whereabouts.

When was he last seen?

North Korea’s state media last reported on Kim’s whereabouts when he presided over a meeting on April 11.

Cheong Seong-chang, director of the Center for North Korean Studies at the Sejong Institute in South Korea, told the New York Times that Kim not making an appearance at his grandfather’s mausoleum during the anniversary was “unthinkable” in the country, describing it as “the closest thing to blasphemy in the North”.

Official statements have conspicuously not mentioned Kim in recent days, while state media were yet to release photos of the leader overseeing an April 14 missile test, as is common.

However, on Saturday, the official Korean Central News Agency (KCNA) reported that Kim had received a message of greeting from the chairman of the Central Committee of the Communist Party of the Russian Federation on the occasion of the first anniversary of Kim’s summit with Russian President Vladimir Putin.

What have reports said?

On Monday, Daily NK, a Seoul-based website that reports on North Korea, cited one unnamed source in the reclusive country as saying that Kim had undergone medical treatment in the resort county of Hyangsan north of the capital Pyongyang. It said Kim was recovering after undergoing a cardiovascular procedure on April 12, made necessary by heavy smoking, obesity and fatigue.

Shortly after, CNN, citing a senior US official with knowledge of the situation, then reported Kim was in “grave danger”, a claim that was refuted in a report by Reuters news agency citing South Korean government sources. 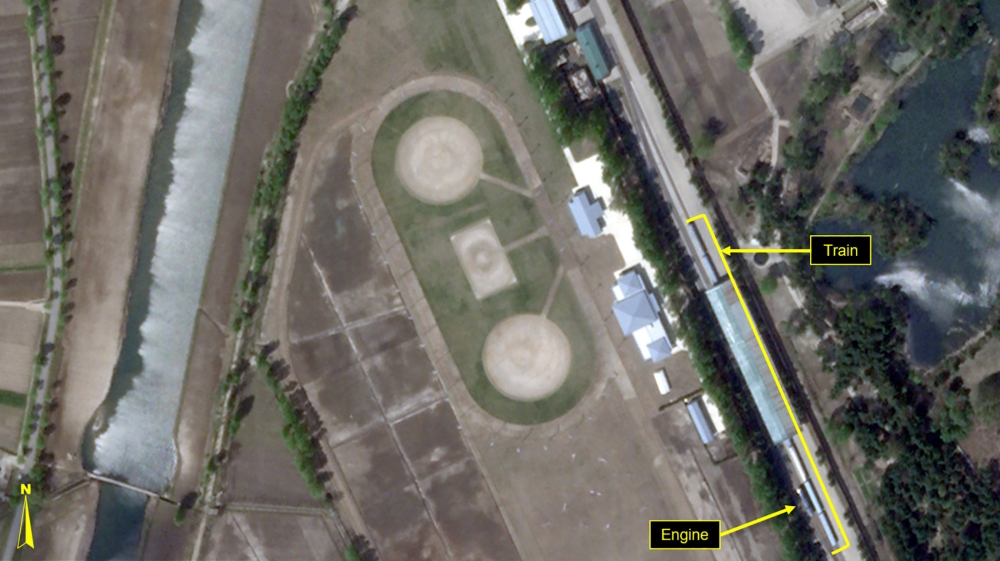 What is described by 38 North as a special train possibly belonging to Kim Jong Un is seen in a satellite image taken over Wonsan, North Korea [Planet Labs-38 North/Reuters]

The news agency also cited a Trump administration official saying that the continuing North Korean media silence on Kim’s whereabouts had heightened concerns about his condition.

Since the NK Daily report, multiple South Korean media reports have cited unnamed sources saying Kim might be staying in the Wonsan area.

On Friday, local news agency Newsis cited South Korean intelligence sources as reporting that a special train for Kim’s use had been seen in Wonsan, while Kim’s private plane remained in Pyongyang. Newsis reported Kim may be sheltering from COVID-19, the respiratory disease caused by the novel coronavirus.

What have other countries said?

US President Donald Trump on Thursday downplayed reports that Kim was ill.

“I think the report was incorrect,” Trump told reporters, but declined to say if he had been in touch with North Korean officials.

Trump has met Kim three times in an attempt to persuade him to give up a nuclear weapons programme that threatens the United States as well as its Asian allies.

South Korea also downplayed Kim’s absence on Tuesday, saying they had detected “no special signs” in North Korea, a statement they have since reiterated.

From Al Jazeera and news agencies

A South Korean security expert, Moon Chung-in, has quashed the growing health and death rumours of North Korean leader, Chairman Kim Jong-un, saying he is “alive and well” and currently in Wonsan, a resort town […]

North Korean leader Kim Jong-un convened an emergency politburo meeting after a person suspected of having Covid-19 returned from South Korea after illegally crossing the border this month, state media said on Sunday. If confirmed, […]