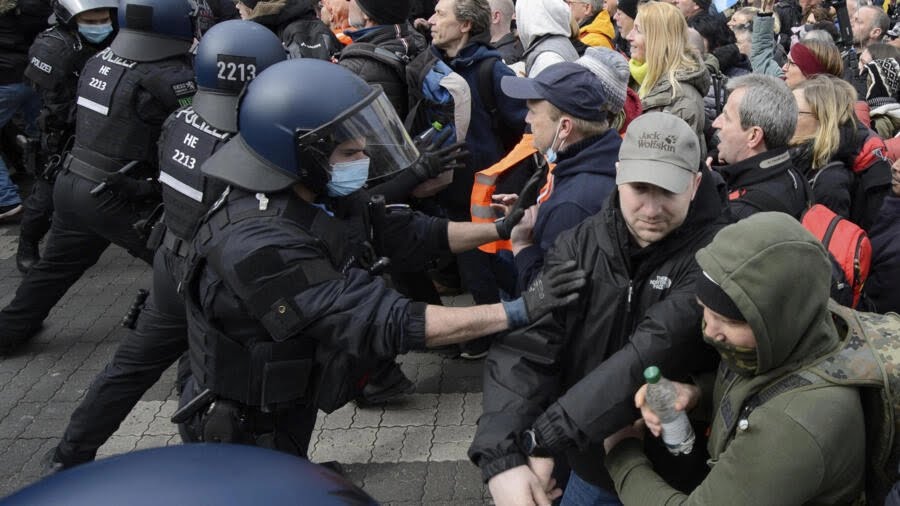 Thousands of people marched through downtown Kassel despite a court ban, and most didn’t comply with pandemic hygiene measures such as wearing face masks. Several reporters were attacked by the protesters, dpa reported.

Federal police, who had been brought in in advance from other parts of the country, used water cannons and helicopters to keep the crowds under control.

Police said that several people were detained, but didn’t give any numbers.

Various groups, most of them far-right opponents of government regulations to fight the pandemic, had called for protests Saturday in cities across the country.

Virus infections have gone up again in Germany in recent weeks and the government is set to decide next week on how to react.

Chancellor Angela Merkel said Friday Germany will have to apply an “emergency brake” to reverse some recent relaxations of restrictions as coronavirus infections accelerate.

In Berlin, some 1,800 police officers were on standby for possible riots, but only about 500 protesters assembled at the city’s landmark Brandenburg Gate. Meanwhile, around 1,000 citizens came together on Berlin’s Unter den Linden boulevard to protest against the far-right demonstration.

Police had to intervene when some far-right protesters tried to attack press photographers, but in general, a police spokeswoman told dpa, “there’s not much going on here.”

In advance of the Berlin protests, authorities had announced they would create three special, popolicy-protectedreas where journalists could withdraw to when under attack by protesters. As in other countries, reporters are increasingly targeted during far-right demonstrations in Germany.

Protesters also hit the streets in other cities across Europe. In London, demonstrators opposing the U.K.’s months-long lockdown defied police who warned of potential fines and arrest for violating prohibitions on most group meetings.

In Finland, police estimated that about 400 people without masks and packed tightly together gathered in the capital, Helsinki, to protest government-imposed COVID-19 restrictions. Smaller demonstrations were scheduled in other Finnish cities.

COVID-19 cases drop to zero in China’s Wuhan where coronavirus broke out to the world, Chinese media report

The number of hospitalized COVID-19 patients in Wuhan, the central China city hardest hit by the epidemic, has dropped to zero, a health official said Sunday. The last patient in serious condition in Wuhan was […]