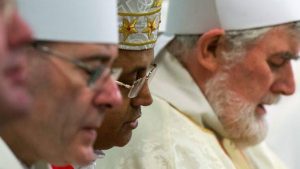 The Catholic Church in England and Wales has said that the government has failed to recognise the “profound sensitivities and spiritual needs” of the people in its plan to re-open churches.

This is in the Church’s reaction to the UK Prime Minister Boris Johnson’s released of a 50-page, three-stage plan to re-open England after a lockdown was imposed March 23 to stem the spread of the COVID-19 coronavirus.

(The devolved governments of Scotland, Wales, and Northern Ireland will set their own timetables to end the lockdown in their respective countries).

The first tentative steps will begin on Wednesday, which will allow people to leave their home more often and participate in limited sports activities with members of their households.

In addition, Johnson said those with jobs in food production, construction, manufacturing, logistics, distribution and scientific research in laboratories should return to the workplace.

In June, the government hopes to allow cultural and sporting events to begin again, albeit behind closed doors to avoid large crowds – these would be able to be broadcast.

Churches would not be allowed to be open until July 4. Currently, churches in the United Kingdom are closed to everyone but clergy, even for private prayer, unlike in most other European countries.

“The timing and the manner of the opening of churches touches profound sensitivities and spiritual needs. The Government’s document and statements fail to recognize this,” said a spokesperson for the Catholic Bishops’ Conference for England and Wales.

“The Government’s position, established [on Monday], includes these steps aimed at opening churches as soon as possible: The establishment of a task force for places of worship, to work closely with ‘stakeholders’ in ensuring that premises are COVID-19 secure; and heeding the experience of other countries in which churches are already open for worship,” the spokesman said in a statement.

The bishops’ conference noted that the Catholic Church has already submitted a detailed plan to the government, in full accordance with public health guidelines, for churches to be opened for private prayer.

“The Church is ready to play its full part in the task force, understanding that this includes the possible earlier use of churches for private prayer, as a first safe step towards their use for public worship,” the statement said.

Earlier this month, the Church leaders in Ireland called on the Northern Ireland Executive to allow churches to be opened for private prayer, as they are across the border in the Republic of Ireland.  The Scottish bishops also announced the creation of a working group which will submit a plan for reopening churches in Scotland.

Nigeria’s President Muhammadu Buhari and Vice President Yemi Osinbajo will, on Saturday, publicly receive the Oxford/AstraZeneca COVID-19 vaccine, TheDailyLeaks has reliably gathered. Both leaders picked the date after the country took delivery of the first […]

The National Primary Health Care Development Agency (NPHCDA) has said that Nigeria hopes to get 42 million doses of COVID-19 vaccine soon to cover one fifth of its population. The Executive Director, NPHCDA, Dr Faisal […]

Ondo State Governor Rotimi Akeredolu, has tested positive for COVID-19. Akeredolu, who disclosed his COVID-19 status on his Facebook page on Tuesday, said he was asymptomatic. However, Akeredolu said he had gone on self-isolation as […]