As the humanitarian crisis continues in Ethiopia’s northern Tigray region, the US Agency for International Development is warning that the area could face famine if aid organizations are not granted unfettered access to the millions in urgent need of assistance.

Emily Dakin, a top USAID official working on the ground in Tigray, told CNN this week that it is estimated that “somewhere between 950,000 to 1.25 million people are inaccessible to humanitarians.”

The United States and the United Nations have reacted with concern to the deepening humanitarian crisis and conflict on the ground in the region where thousands of civilians are believed to have been killed since November, when Ethiopian Prime Minister Abiy Ahmed launched a military operation against the region’s ruling Tigray People’s Liberation Front (TPLF). 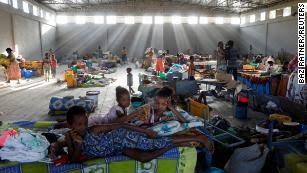 Speaking from the Ethiopian capital of Addis Ababa, Dakin said that the USAID Disaster Assistance Response Team she leads has been able to travel to parts of Tigray, particularly around the regional capital of Mekelle, and has seen “a significant amount of humanitarian need.” The team was deployed to Tigray in early March.

“There’s a pretty critical tipping point where famine is possible and could occur in parts of Tigray without the immediate cessation of hostilities and a rapid increase in humanitarian access and scale-up of life-saving humanitarian assistance,” she said.

USAID has not independently confirmed reports of famine in pockets of the region, but Dakin acknowledged there are “incredibly concerning” reports of starvation in parts of Tigray.

“Right now, we’re tracking about 4.5 million people in the Tigray region who are in need of humanitarian assistance, and about 4 million of those people are in need of food assistance,” she said. “We are seeing increased numbers of people who are internally displaced. Right now about 1.1 million internally displaced people are in the Tigray region. And we’re also seeing a concerning situation when it comes to the health situation, about 15% of hospitals and health centers are fully functioning.”

State Department officials including Secretary of State Antony Blinken have repeatedly called for unhindered humanitarian access to the region, with the top US diplomat raising his concerns “about the deteriorating humanitarian and human rights crisis in the country” in a call with the Abiy this week. Dakin said the US government and USAID are “engaging regularly with various members of the government on different elements of the humanitarian assistance,” including matters of access.

Dakin told CNN that “some of the major roadways that our humanitarian partners have relied on have become less accessible or less consistently accessible in the past couple of weeks.” Those partners have reported new checkpoints along different routes, she said, and noted that “active pockets of conflicts that continue to break out make it insecure and unsafe for our partners to travel different routes.”

Blinken and the State Department have repeatedly for forces from neighboring Eritrea to withdraw from Tigray and the top US diplomat told Abiy that “Eritrean forces and Amhara regional forces in Tigray are contributing to the growing humanitarian disaster and committing human rights abuses.”

CNN has investigated some of the reports of atrocities emerging from the region, including reports of widespread sexual violence by Ethiopian and Eritrean forces.

“We, along with others are very concerned about the reporting that we’re hearing, and the (Disaster Assistance Response Team) is absolutely providing support to individuals who have suffered trauma or conflict-related injuries, and certainly to women and girls who have experienced violence either as they’re fleeing or where they’re located,” Dakin told CNN.

President Biden on Tuesday announced his intention to nominate Robert Santos, the president of the American Statistical Association, to lead the U.S. Census Bureau. Should he be confirmed, Santos would be the first person of […]

A dozen top United Nations officials on Monday called for a stop to indiscriminate and targeted attacks against civilians in Ethiopia’s northern Tigray region, particularly calling out reports of rape and “other horrific forms of […]

US Secretary of State Antony Blinken has described the violence in Ethiopia’s Tigray region as “ethnic cleansing.” But authorities in Ethiopia’s Amhara region on Thursday rejected the accusations and called them “propaganda” statements. Earlier this […]