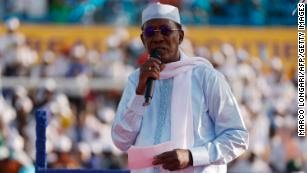 It comes following attacks in the north of the country by rebels.

Rebels of the Front for Change and Concord in Chad (Front Pour l’Alternance et La Concorde au Tchad) (FACT) reported in a statement on Monday that Deby was injured and on the run.

Deby, who ruled since 1990, was declared victorious in the first round of the country’s presidential electon held on April 11, 2021.

Deby was an experienced military man who first joined the army in the 1970s during the former French colony’s civil war.

He eventually became commander in chief of the armed forces under former president Hissène Habré who served from 1982 to 1990.

In that year, an insurrection led by Deby hounded President Habré out of office. Deby promised to establish a functioning multiparty democracy and put an end to the previous regime’s lawlessness and violence.

That promise was short-lived. Deby’s ambitions quickly shifted to staying in power by any means and enriching his extended family.

The Chadian military earlier said it had halted an advance by forces opposed to the government that were coming from neighbouring Libya.

The forces said on April 18, 2021 that they were pressing ahead, after the American and British embassies warned of a possible assault on the capital N’Djamena, ordering their citizens to leave.

Idriss Deby Into, who had just won re-election as president of Chad, is dead after fighting with rebel forces, military spokesman Azem Bermandoa Agouna says. “The president of the republic, head of state, supreme chief […]

36 killed as train collides with truck in Taiwan, dozens injured

At least 36 people were killed and dozens more were injured when a train derailed in Taiwan on Friday after apparently colliding with a truck. The train was carrying around 350 people, the country’s fire department said, […]

Chad’s President Idriss Deby has died while visiting troops on the front line of a fight against northern rebels, an army spokesman said on Tuesday, the day after Deby was declared the winner of a […]