A study has confirmed that cats are capable of transmitting the coronavirus, days after a Belgium woman passed the disease on to her pet.

The study, undertaken by researches at the Harbin Veterinary Research Institute in China, concluded that cats are highly vulnerable to the virus.

The lab discovered that the animals can transmit the disease to other cats through respiratory droplets after it undertook experiments on a small number of them. 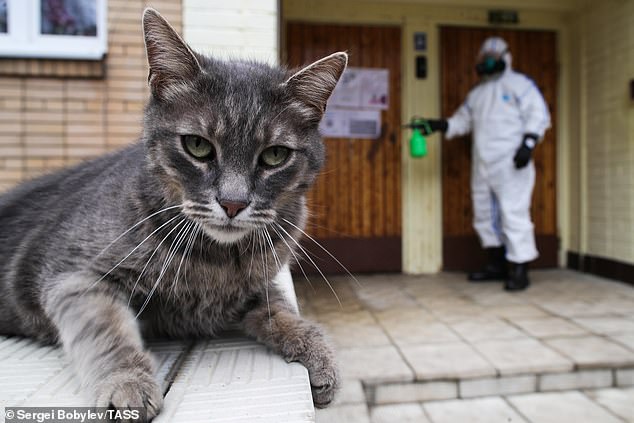 Cats are capable of transmitting the coronavirus between themselves, a study in China has found. Picture: A cat relaxes outside Moscow apartments being disinfected

The news comes a week after a case in which a Belgium woman was found to have passed on the coronavirus to her pet cat. Vets found the infection on her pet a week after the woman had come down with the illness.

Cats are capable of transmitting the coronavirus between themselves, a study in China has found. Picture: A cat relaxes outside Moscow apartments being disinfected

The news comes a week after a case in which a Belgium woman was found to have passed on the coronavirus to her pet cat. Vets found the infection on her pet a week after the woman had come down with the illness.

At the time, Belgium virologist Steven van Gucht said it was an ‘isolated incident’, showing how quickly scientists are developing their knowledge of the new strain of coronavirus that was only discovered in Wuhan, China in December.

The study is yet to be peer-reviewed, the process in which studies are evaluated to determine their credibility, although experts have said the findings are legitimate and credible.

The study was done by administering a few cats with a high dosage of the disease. Cats which weren’t infected were then placed in adjacent cages to those which were.

They weren’t able to touch, but were close enough that they also caught the disease, leading to the conclusion that it can spread between the animals through repository droplets. This process was repeated with another group.

The findings did not prove that the disease can be spread from cats to humans, virologists and infectious disease experts told The Guardian but they did warn that people with cats should be extra cautious, and remember the importance of washing their hands.

‘Surveillance for Sars-CoV-2 in cats should be considered as an adjunct to elimination of of Covid-19 in humans,’ the study concluded.

Prof Eric Fèvre, chair of veterinary infectious diseases at the University of Liverpool, said: ‘People should take usual precautions of hand washing when handling their pets, and avoid overly intimate contact, especially if sick with Covid.

‘It is important to add that this says nothing about how the virus coming out of a cat may or may not be infectious to humans.’

Just last week, the first reported case of a cat catching the coronavirus was found when a woman, from the Belgium city of Liege in the French speaking part of the country, passed the disease on to her pet.

At the time, public statements coming out of Belgium from health officials were saying that this was an unusual incident.

‘The cat lived with her owner, who started showing symptoms of the virus a week before the cat did,’ van Gucht said.

‘We want to stress that this is an isolated case. Additionally, in this case, we are talking about a human-to-animal transmission, not the other way around.

‘There are no indications that this is common. The risk of animal-to-human transmission, is very small.’

Before the cat in Belgium, two dogs in Hong Kong were reportedly found to have caught the virus, however the study in china found that dogs, chickens, pigs and ducks were less likely than cats to catch the infection.

Yesterday, the global confirmed cases of the coronavirus reached 1 million, with over 52,000 deaths. The cases have  doubled in the last week.

French health authorities reported 16,096 new confirmed coronavirus cases on Thursday, blowing away the previous record of 13,498 and setting a fourth all-time high of daily additional infections in eight days. The number of people in […]

The Nigeria Centre for Disease Control (NCDC) has announced 481 new COVID-19 cases, while it called on Nigerians to take preventive measures against the coronavirus during the Eid-el-Kabir celebrations. The NCDC made this known on […]