The monsoon-like downpour drenches a busy highway, causing tricky driving conditions for the stream of SUVs. Sudden waterfalls appear on the side of the road.

It would be a common sight in parts of Southeast Asia, but this is the United Arab Emirates, in the height of a summer heatwave which has seen temperatures regularly surpass 120F.

And according to the UAE’s National Centre of Meteorology, the precipitation was enhanced by cloud seeding operations to increase rainfall in the Gulf country.

Its cloud seeding operations are part of an ongoing mission to generate precipitation in the Middle East country, which has an average rainfall of just four inches, Independent said.

The enhanced rain is created using drone technology that unleashes electrical charges into clouds in order for them to clump together and form precipitation.

The National reported the heavy rainfall caused waterfalls to appear in the city of Ail Ain and made driving conditions hazardous.

In an effort to curb the country’s sinking water table, the UAE invested $15 million in nine different rain-making projects in 2017.

The current system being used to change the electrical charge of the clouds is being led by researchers at the University of Reading in England. Professor Maarten Ambaum, who worked on the project, told the BBC in March that the UAE has enough clouds to create conditions conducive to rain.

The project tries to get the water drops to merge and stick when they receive an electrical pulse, “like dry hair to a comb”.

“When the drops merge and are big enough, they will fall as rain,” Prof Ambaum told the BBC.

Applying electrical shocks to clouds is preferred as it doesn’t require the use of chemicals. 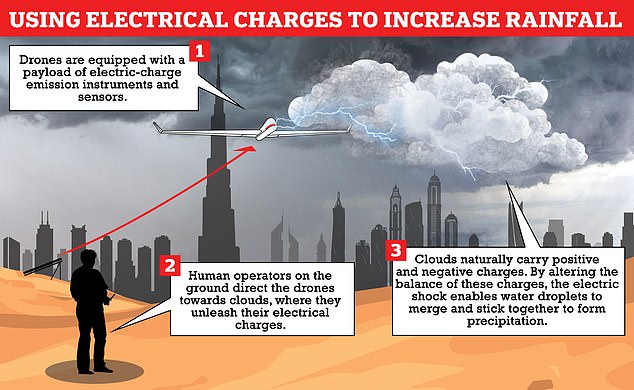 Microscopic particles of silver iodide are shot into existing clouds using land based generators or aircraft.

Silver iodide is an ice-forming agent, which causes supercooled water droplets to freeze in the clouds.

The ‘ice embryos’ interact with the surrounding water droplets, and eventually grow to snowflakes.

These fall to the ground as snow or raindrops, depending on the surface temperatures.

Cloud seeding can also, in some cases, cause the cloud to grow larger and last longer than it would have without the modification.

Dubai Crown Prince Sheikh Hamdan bin Mohammed bin Rashid Al Maktoum has paid the hospital expenses of a Nigerian mother and her quadruplets stranded in the city with mounting medical bills, according to the hospital. Suliyat […]

A Nigerian woman went into labour mid-air aboard the United Arab Emirates aircraft conveying her and the 256 others making the first batch of stranded Nigerians returning from Dubai to Lagos, on Wednesday. She gave […]

Cybercrimes: How Hushpuppi, Woolberry were arrested in Dubai with ‘$40 million cash’

More revelations have emerged on how the alleged Nigerian transnational internet scammers, Ramon Olorunwa Abbas, aka, Hushpuppi and Olalekan Jacob Ponle, aka, Mr Woodberry, were arrested by arrested in their United Arab Emirates (UAE) by […]