Hundreds of people have gathered outside of the Capitol in Washington D.C., to peacefully protest following the death of George Floyd.

Freedom Fighters D.C. says they are coming together to honor victims of police brutality in solidarity with protesters across the nation.

“We want freedom,” the group could be hear chanting.

Fox News said, after pleas from individuals to “take a knee,” officers could be seen lowering to the ground as the crowd erupted in applause. 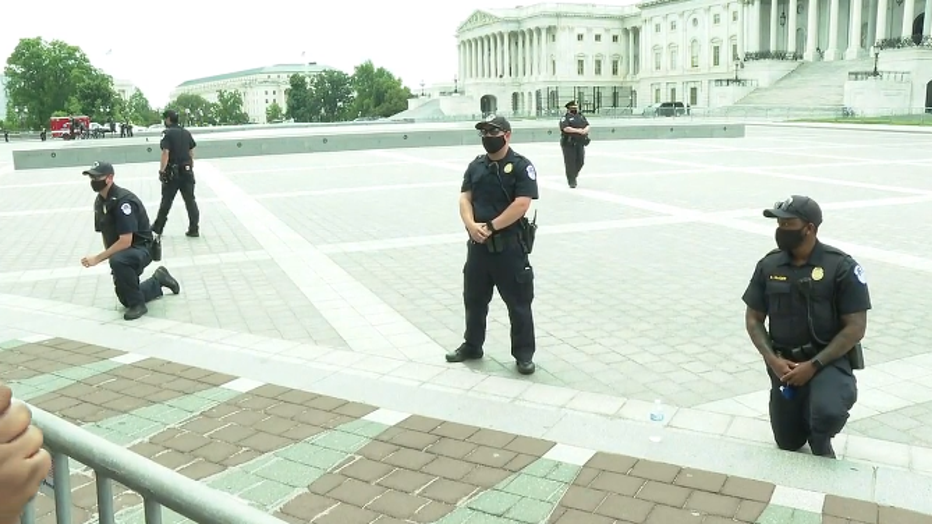 Armed law enforcement units lined up in the streets near Lafayette Park early Wednesday morning after a fifth night of mostly peaceful protests in the District.

A block away from the White House, thousands of demonstrators massed following a crackdown a day earlier when officers on foot and horseback aggressively drove peaceful protesters away from Lafayette Park, clearing the way for President Donald Trump to do a photo op at nearby St. John’s Church.

Tuesday’s protesters faced law enforcement personnel who stood behind a black chain-link fence put up overnight to block access to the park.

“Last night pushed me way over the edge,” said Jessica DeMaio, 40, of Washington, who attended a Floyd protest Tuesday for the first time. “Being here is better than being at home feeling helpless.”

Nigeria’s Inspector General of Police (IGP), Mohammed Adamu, has said that the training for operatives of the Special Weapons and Tactics (SWAT) unit will commence on Monday. The new tactical team had been set up […]

London: ‘Stay away’ or risk fines, police warn ahead of planned protests

The Metropolitan police have said they are aware a number of protests are being organised for this weekend in central London, including a planned ‘Freedom Day’ protest. The force has released a statement warning people […]

The Nigeria Police authorities have announced the dissolution of the Special Anti-Robbery Squad (SARS). The Inspector-General of Police, IGP Mohammed Adamu, who made the announcement on Sunday, said its formation has been dissolved across the […]