The U.S. President Joe Biden-led administration has given its formal backing to Ngozi Okonjo-Iweala to lead the World Trade Organization (WTO), removing the final obstacle to her bid to be the first woman and the first African to run the Geneva-based trade body.

“Dr. Okonjo-Iweala brings a wealth of knowledge in economics and international diplomacy,” the office of the U.S. Trade Representative said in a statement Friday. “She is widely respected for her effective leadership and has proven experience managing a large international organization with a diverse membership.”

The USTR added it “looks forward to working with a new WTO director-general to find paths forward to achieve necessary substantive and procedural reform of the WTO.” 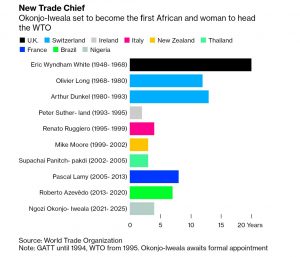 The Biden administration’s decision to support Okonjo-Iweala’s campaign will be viewed in Geneva as a welcome shift in U.S. support for the multilateral trading system following four years of salvos against an organization that former President Donald Trump previously called the worst trade deal the U.S. ever signed.

With the U.S. now joining a consensus, WTO general council Chairman David Walker is expected to soon announce a meeting in Geneva, where the organization’s members will formally approve Okonjo-Iweala’s appointment to a four-year term as director-general. WTO Spokesman Keith Rockwell declined to comment.

On her Twitter account, Okonjo-Iweala said she was “grateful for the expression of support from the U.S.”

Grateful for the expression of support from the US today for DG @WTO. Congratulations to Madam Yoo of Rep. Korea for a hard fought campaign.Thank You President Muhammadu Buhari @MBuhari &all Nigerians for your unflinching support.Thank you friends. Love to my family.Glory to God.

European Commission Trade Commissioner Valdis Dombrovskis tweeted his support of the U.S.’s position, and urged colleagues to “move forward with her appointment so we can give the necessary stability to WTO and start the much-needed reform process.”

Bloomberg said the appointment of a new WTO chief will help the beleaguered organization to confront an array of internal crises and begin deliberating a more structured conversation of how to make 25-year-old WTO fit to govern the 21st century trading system.

The organization has been without a leader since September, when Roberto Azevedo vacated the position a year before his term was set to expire. Since then, the WTO has been overseen by four unelected deputy directors-general.

That opposition was enough to halt the selection process because WTO decisions are made on the basis of a consensus of its 164 members. Yoo ended her campaign on Friday following consultations with the Biden administration.

Okonjo-Iweala previously served as Nigeria’s finance minister and has experience working at international governance bodies as a former managing director of the World Bank.

She was until recently a chair at the Global Alliance for Vaccines and Immunization — a position that provided her with a unique perspective on how global trade can help facilitate the roll-out of vaccines and other critical tools needed to combat the Covid-19 pandemic.

The 66-year-old Nigerian economist, who is also a U.S. citizen, has pledged to take a more active role as director-general and to act as a sounding board to try to find common ground among the trade body’s disparate membership.

Though the power of the WTO leader is limited by the directives of its members, the director-general can convene meetings, and offer suggestions and strategies for addressing conflicts in the global trading system.

It will be recalled that South Korean Trade Minister Yoo Myung-hee ended her campaign to lead the World Trade Organization, leaving former Nigerian Finance Minister Ngozi Okonjo-Iweala as the likely candidate for the job and setting up a key decision by WTO members to approve her appointment.

By quitting the race, Yoo would appear to be clearing Okonjo-Iweala’s path. But as the Biden administration forms its trade team, few clues have emerged publicly about whether it will lift U.S. opposition to Okonjo-Iweala’s candidacy. The U.S. mission to the WTO in Geneva didn’t immediately respond to Bloomberg’s request for comment.

Okonjo-Iweala congratulated Yoo on her “long campaign” and welcomed South Korea’s commitment to rebuilding and enhancing multilateralism, the Nigerian’s spokeswoman Molly Toomey said in a statement.

“The WTO must turn its focus to the Covid-19 pandemic and global economic recovery,” Toomey said. “Dr. Okonjo-Iweala is eager to focus on the many needed reforms at the WTO.”

The 66-year-old Nigerian economist, who is also a U.S. citizen, emerged as the front-runner for the WTO director-general post last year. If the U.S., Korea and the other 162 members join a consensus to appoint Okonjo-Iweala, the WTO can announce a meeting to confirm her appointment within a matter of days.

If confirmed, Okonjo-Iweala would be the first woman and the first African to lead the organization in its 25-year history.

The Nigerian House of Representatives has unanimously endorsed the candidature of Dr. Ngozi Okonjo-Iweala for the position of the Director-General of the World Trade Organisation for 2021 to 2025. This was sequel to a unanimous […]

President Donald Trump acknowledged the end of his first term as president early Thursday morning saying there would be an “orderly transition of power” on Jan. 20 minutes after Congress formally certified the Electoral College votes in favor […]