Governor Udom Emmanuel of Akwa Ibom State has described Prof Yemi Osinbajo, SAN, as the “pride of Nigeria,” as he extolled the virtues of the Vice President who was in the state to commission projects marking the 34th anniversary of the state.

Prof Osinbajo had visited Akwa Ibom State, an oil-rich state, on the invitation of Governor Emmanuel, where he inaugurated the 21-storey Dakkada Tower, in Ibesikpo Asutan Local Government Area of Akwa Ibom, on Friday.

Earlier on his arrival, the Vice President had made a stop to flag off the Dakkada Luxury Estate said to have been designed to provide maximum affordable housing for people, after which he left for the central business district of Uyo to in augurate the Dakkada Towers, which the state government described as a smart, intelligent building fitted with the best communication and security gadgets.

While addressing the crowd at the inauguration ceremony, Governor Emmanuel, who was interposed with shouts of joy by the obviously elated state residents who had gathered to witness the occasion, even as he extolled the virtues of the Vice President, Prof Osinbajo, who was in their midst, made an inspiring remark on the person of Nigeria’s second citizen. 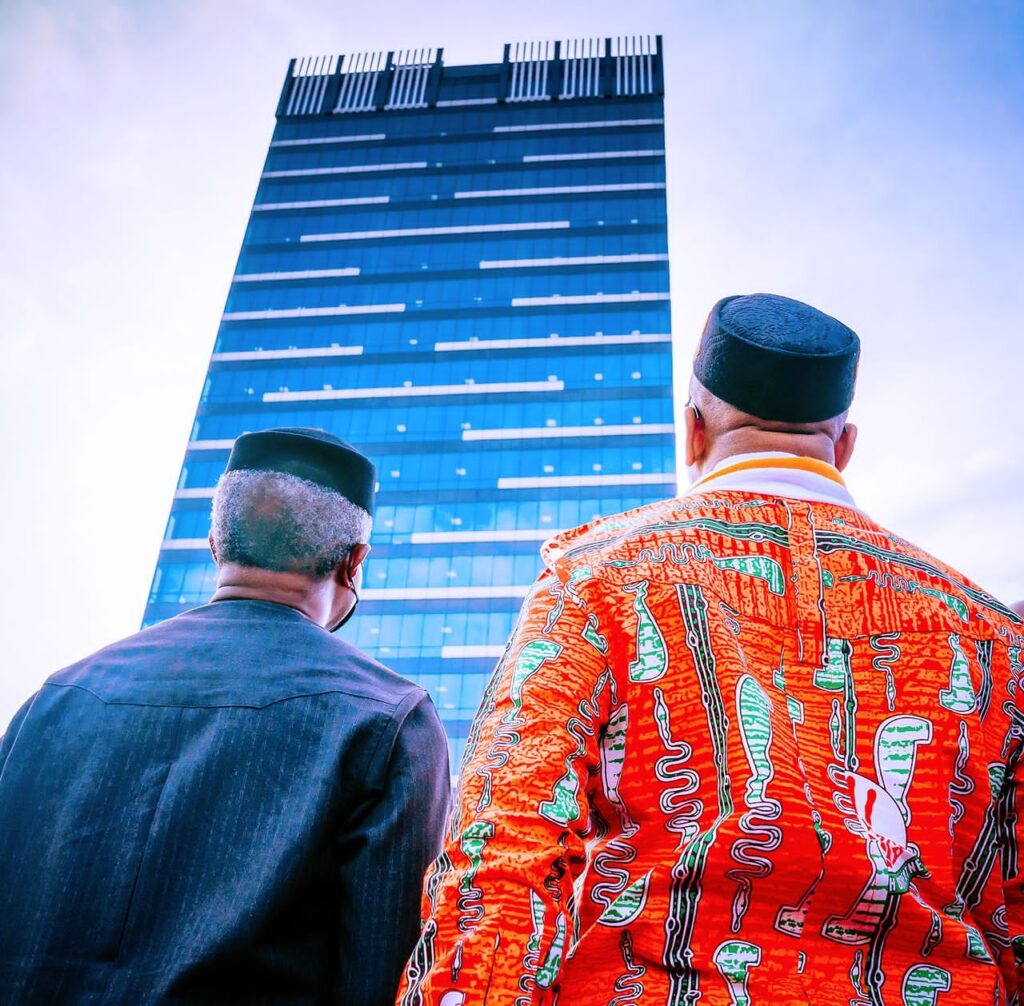 As he spoke to the rousing cheers from Governor Emmanuel, who had earlier harped on unity among the people during a state broadcast, urged them to wrap themselves up in a garment of unity.

“We can achieve a lot when we are united. I recognise the fact that people will share and entertain different political interests.

“I also recognise the fact that politics sometimes can lead decent people to veer off the path of nobility, but such should not motivate us to seek to destroy the best in us, just to satisfy our political paymasters,” Governor Emmanuel said.

At the inauguration ceremony proper, Governor Emmanuel described the Dakkada Tower as “the smartest, intelligent, most modern building” Nigeria can boast of today, in Akwa Ibom.

He advised the International Oil Companies (IOCs) to relocate to Uyo and secure offices in the 21-Storey Dakkada Tower, as it was ready to accommodate them.

“The oil companies were complaining that they didn’t have office accommodation, that has ended today,” Emmanuel said.

He informed that his administration was spearheading innovations that would create revenues and jobs, in order to put the state on the world map.

The governor, who commended the Vice President for consistently showing Akwa Ibom people love, said that Prof Osinbajo would come back to the state, to commission an International Worship Centre.

The State Commissioner for Special Duties, Mr Okpolukpom Etteh, had said the Tower was the best ICT compliant building in the country, borne out of the directive of the FG for International Oil Companies to relocate their headquarters to their areas of operation.

Ette said that the smart building was sited on a 48,000 sqm of land, with a 400 capacity car park and is defined by an increased automation and integration, advanced electronic and information technologies.

It also has an integrated structure, with a system, service, energy efficient and management, with an enhanced connectivity through wired and wireless networks and advanced sensor systems.