Michigan’s attorney general has warned President Donald Trump to follow health guidelines and wear a mask during his visit Thursday to a Ford manufacturing plant.

“We are just asking that President Trump comply with the law of our state, just as we would make the same request of anyone else in those plants,” Dana Nessel, a Democrat, told CNN’s Alisyn Camerota on “New Day” Thursday. 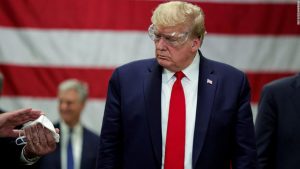 The President plans to tour and deliver remarks at the Ford plant in Ypsilanti, which has been repurposed to produce ventilators and personal protective equipment.

So far, Trump has resisted covering his face in public or being seen wearing a mask, despite the federal government’s recommendations to do so in public during the coronavirus pandemic.

On Thursday, Nessel warned that if Trump “fails to wear a mask, he’s going to be asked not to return to any unclosed facilities inside our state.”

The Democratic attorney general also threatened legal action against “any company or any facility that allows him inside those facilities and puts our workers at risk.” She didn’t outline what legal mechanism she would use against Ford, and in an open letter to Trump published on Wednesday, she said he had a “moral” obligation to wear a mask.

Another executive order Whitmer signed this week requires anyone who is medically able to wear a facial covering when in an enclosed space.

On Tuesday, Ford said it had shared its safety policies with the White House — including that everyone wear a mask “in all facilities, at all times” — but added that “the White House has its own safety and testing policies in place and will make its own determination.”

Asked Tuesday if he would wear a mask on his visit, Trump said, “I don’t know. I haven’t even thought of it.”

Trump recently went maskless during his tour last week of a medical equipment distribution facility in Pennsylvania and his tour earlier this month of a Honeywell plant in Arizona that produces N95 respirator masks.

• Father too COVID-19 positive A mother of two who recently tested positive for coronavirus has refused to part with her one year old lady, after her first child, a three-year-old girl also tested to […]

The number of people infected with coronavirus in Nigeria rose to 12,801 on Monday, with 4,040 already treated and discharged. The Nigeria Centre For Disease Control (NCDC), giving an update on the disease, late Monday […]

The big three social media platforms have locked President Trump’s accounts because his posts violated their policies during riots at the U.S. Capitol. After originally planning to block President Donald Trump from posting to his Facebook […]