The battered dollar’s long-term fortunes are unlikely to improve regardless of who wins Tuesday’s U.S. presidential election, investors and analysts said.

Despite its recent bounce against a basket of currencies, the dollar index =USD is still down about 9% from its March highs and on track for its worst year since 2017, weighed down by expectations that U.S. rates will remain near historic lows for years to come.

Many market participants believe that a victory by Joe Biden – currently the front-runner in polls – and a potential Democratic sweep would likely weigh on the U.S. currency further, as the former vice president is expected to open the door to policies that investors view as dollar-negative, including robust fiscal stimulus.

Four more years of a Donald Trump presidency may offer a less-clear path for the dollar. Although a continuation of Trump’s belligerent approach toward China would likely boost the dollar’s allure as a haven asset, those gains may be outweighed by factors such as continued negative U.S. real yields, analysts said.

A Reuters poll last month showed analysts’ median forecast looking for the euro to rise to $1.21 in a year, up about 4% from current levels.

Here are some of the main factors expected to influence the dollar over the long term. 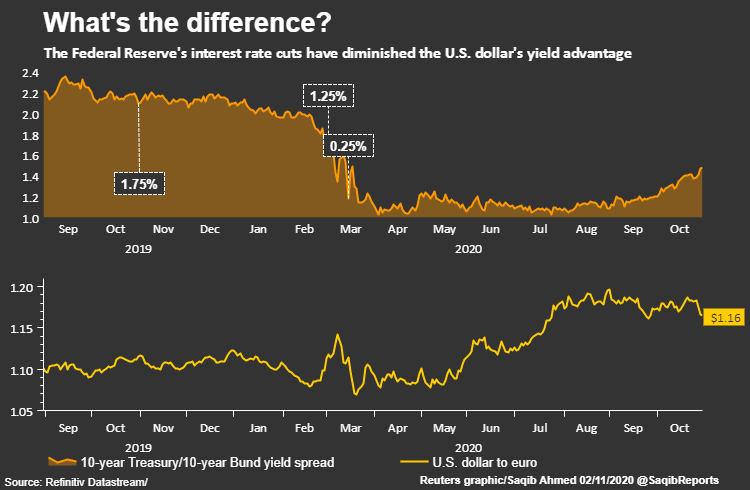 That yield advantage shrank in 2020, when the Federal Reserve slashed interest rates to combat the economic fallout of the coronavirus pandemic and pledged to keep them at historic lows for years.

“The biggest FX trends …will be the COVID-induced downward convergence of interest rates,” said Kit Juckes of Societe Generale, in a note to clients. This “is unambiguously negative for the dollar, and far from priced-in.” 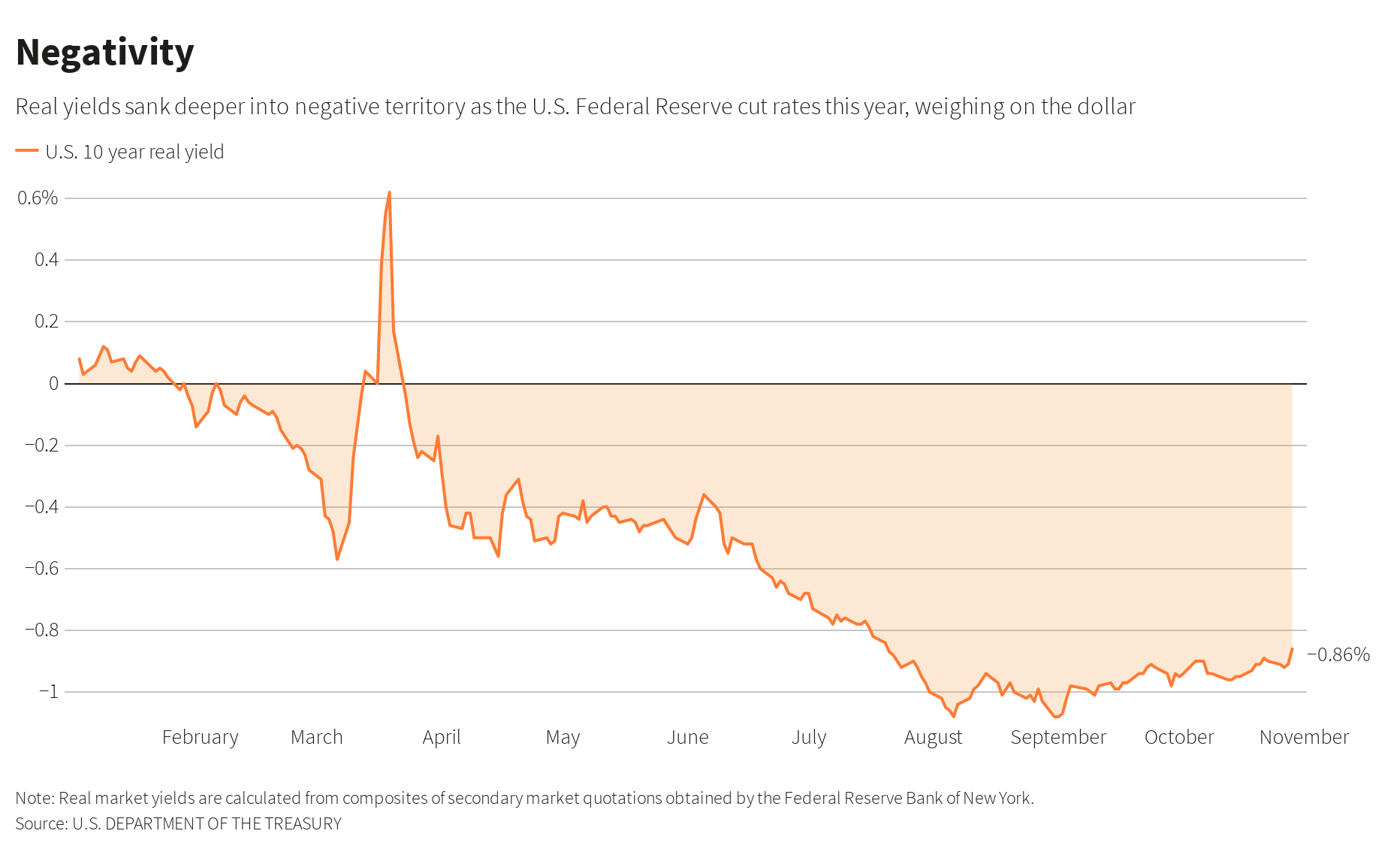 Real, or inflation-adjusted, yields on U.S. 10-year Treasuries plunged below zero in 2020 amid the coronavirus pandemic. That has diminished the dollar’s attractiveness and fueled rallies in everything from stocks to gold.

A Reuters poll in September showed analysts expected the yield to rise to 0.93% in 12 months, about half the expected average inflation rate, suggesting negative real returns over the coming year.

“We do not see a scenario which would derail a resumption of the (dollar’s) current broad downtrend, as U.S. real yields are likely to remain negative,” analysts at BNP Paribas wrote.

Graphic: Fuel for a rally? 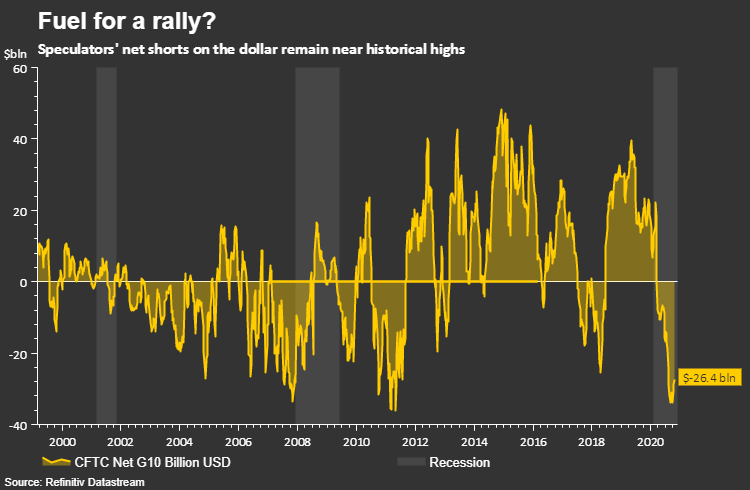 Net bets against the dollar stood at $26.46 billion in the futures market last week after hitting a more than 9-year high of $34.07 billion in August. NETUSDALL=

While that short position reflects the negative sentiment swirling around the dollar, it could also fuel gains if a change in the narrative forced investors to unwind those bets all at once.

The uncertainty surrounding a contested election could be one such event. Some analysts believe a Trump win or divided government – which could result in a smaller or delayed fiscal stimulus package – may be another.

Because the market consensus appears to lean heavily on a Biden win, “a Trump victory is hugely bullish for the (dollar),” analysts at TD securities wrote. “The market is not priced for a return of fresh geopolitical uncertainty and zero-sum, tit-for-tat trade battles.”

Trump has railed against a strong dollar throughout most of his term, complaining that it gives other nations an unfair competitive advantage in trade.

Graphic: Trump and the U.S. dollar, 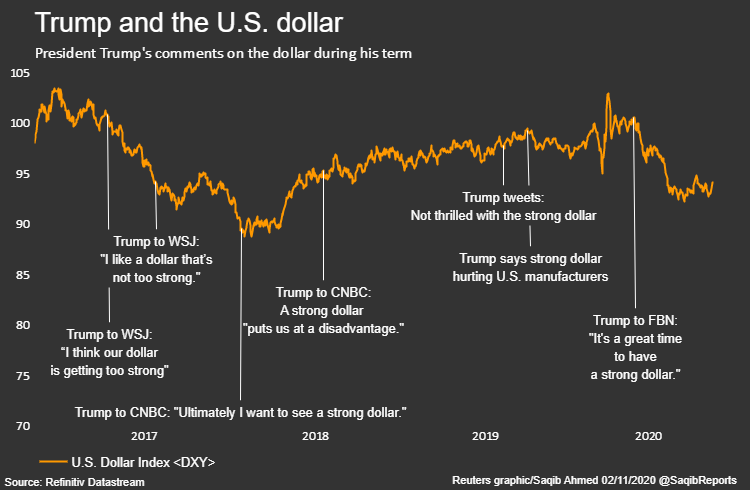 Although the accelerated fiscal spending expected in a potential Biden presidency may weigh on the dollar, some believe the Democrat’s less confrontational approach to foreign policy may bolster the dollar’s appeal as a reserve currency.

Biden “will not talk the (dollar) down; and he will embrace multilateralism, including the framework that has built and supported the (dollar’s) reserve currency status,” wrote Alan Ruskin of Deutsche Bank.

US Election 2020: Global stocks rise as Americans decide on Biden or Trump presidency

Global shares have risen, helped in part by a surprisingly big improvement in Chinese economic data and as investors pared back some of last week’s bearish positions, despite another national lockdown in England and the […]

Biden nears 270, leads in Georgia ahead of Trump as count continues

Former Vice President Joe Biden is now leading President Donald Trump in Georgia, a stunning turn of events in a once reliably Republican state that Trump must win in order to clinch reelection. Biden jumped ahead of […]

President Donald Trump on Tuesday rejected a massive Covid economic relief package passed by Congress, branding it “a disgrace” in an act of political brinkmanship less than a month before he must leave office and […]