A poor and desperate man has been filmed scooping spilt milk from the road while stray dogs lap it up during India‘s lockdown which has exacerbated the country’s poverty.

He was spotted on Monday morning in Agra, a city of 1.6 million in the north of the country, gathering the milk into his pot after a container truck overturned in the road, Mail Online reported.

Prime Minister Narendra Modi said on Tuesday that India’s lockdown, the world’s largest, keeping 1.3 billion indoors, is to be extended until at least May 3.

‘From the economic angle, we have paid a big price,’ Modi said. ‘But the lives of the people of India are far more valuable. From the experiences of the last few days it is clear that the path we have chosen is correct.’ 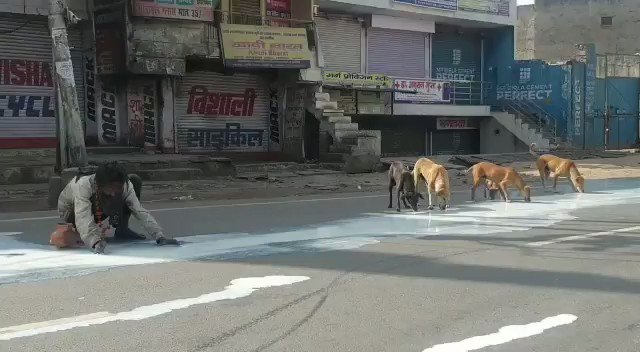 2,705 people are talking about this 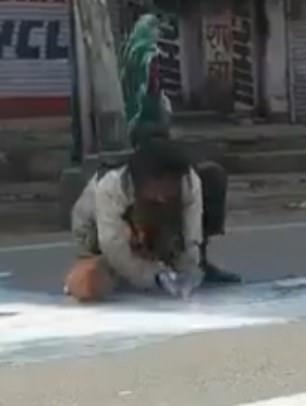 India’s current three-week-old lockdown, in force since March 25, had been scheduled to end at midnight Tuesday.

The move comes despite complaints from millions of poor, a vast underclass who have been left almost completely without support as jobs have vanished and incomes dried up.

Modi said there would be ‘limited relaxations’ from April 20 for districts with no cases, and new guidelines for industry and agriculture would be released on Wednesday.

The announcement comes as debate rages around the world on how to lift restrictions so that the economic carnage of the pandemic can be eased without a new spike in infections.

Official figures suggest South Asian nations have so far been relatively unscathed by the epidemic, with around 10,000 cases and 339 deaths in India.

Some experts say India has not conducted enough tests and that the true number of infections is much higher.

And with some of the most crowded cities on the planet, there are fears that numbers could take off and overwhelm the shaky healthcare system.

Several states including Maharashtra – home to Mumbai and with the highest number of cases – Tamil Nadu and Odisha have already announced lockdown extensions.

The shutdown, with strict limits on activity, has been devastating for the economy – and in particular for India’s poor.

Millions of daily wage labourers suddenly lost their jobs, forcing hundreds of thousands to travel hundreds of miles back to their home villages, often on foot.

Some died on the way, while others were shunned by locals when they made it back to their villages.

One clip that went viral on social media showed a group of migrants being hosed down with chemicals by local officials. 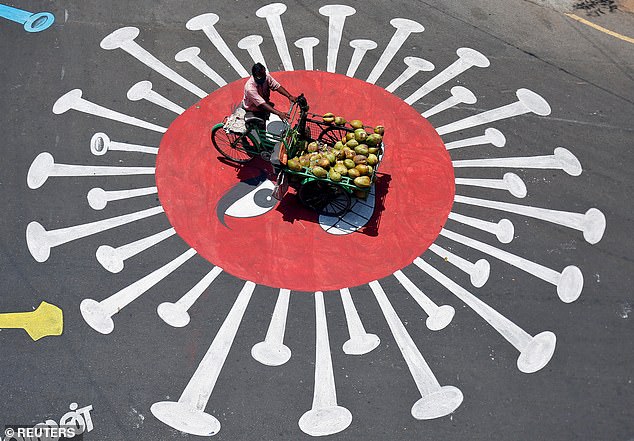 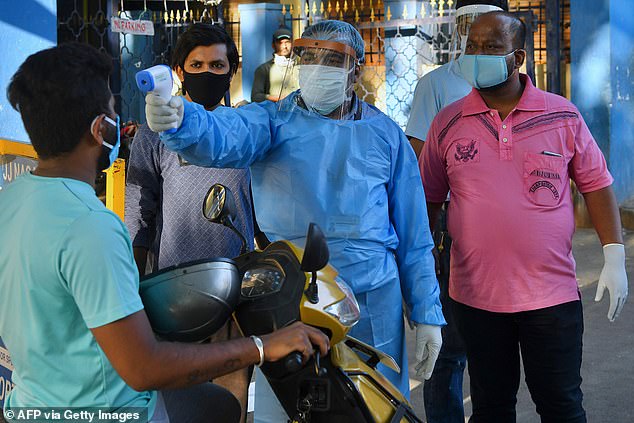 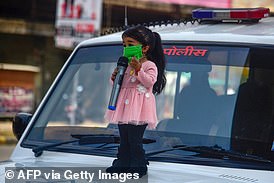 The world’s shortest woman took to the streets in central India Monday to call on people to stay at home, after police appealed for help enforcing a coronavirus lockdown.

Jyoti Amge, who is just 62.8 centimetres tall, encouraged people to wash their hands and wear a mask and gloves when they leave their homes as she made appearances across Nagpur city, in Maharashtra state.

‘Our police officers, healthcare workers, military officers are on the frontline battling the virus and saving lives and I wanted to contribute in my own way, however small,’ the 26-year-old told AFP.

‘I asked people to maintain social distancing and stay home to cut the virus transmission chain.’

Amge has a form of dwarfism called achondroplasia and is the world’s shortest woman according to the Guinness World Records.

She has worked in television – both in India and the United States – after taking the title in 2011.

Others have been stranded in cities in cramped, unsanitary conditions where the virus could spread quickly.

Farmers have complained of a lack of workers to harvest crops while snarl-ups of thousands of trucks not allowed to move because of the lockdown have hampered food transport.

‘We have tried to keep the interests of the poor and the daily wage workers in mind while making these new guidelines,’ Modi said in his 24-minute address.

‘The central and state governments are working together to ensure that the farmers don’t face any problems.’

Reserve Bank of India governor Shaktikanta Das has called the coronavirus an ‘invisible assassin’ that could wreak havoc on the economy.

A restaurant industry group, a sector that employs millions of people nationwide, warned Monday there could be ‘social unrest’ if it did not receive financial relief.

The commerce ministry has also reportedly urged the government to consider opening more activities ‘with reasonable safeguards’ even if the lockdown is extended.

Even before the pandemic, the Indian economy was stuttering, with the highest unemployment for decades.

Growth had slowed to about 5.0 percent before the pandemic and some analysts say it could slump to 1.5-2.0 percent this year – way below the level needed to provide jobs for the millions coming into the labour market each month.

Nigeria’s Vice President Yemi Osinbajo has said that the Federal Government is ready to examine every possible option in the development and distribution of a vaccine against the COVID-19 disease. Disclosing this in a statement […]

Governor, Kayode Fayemi of Ekiti State has appointed a father who rejected his son’s entry home after sneaking into Ekiti State as COVID-19 response ambassador. The father, Mr Femi Adeoye, whose video where he engaged […]

COVID-19: US repatriates 997 Americans from Nigeria back home

The United States Mission in Nigeria said it has helped 997 Americans return home to reunite with family and friends as  result  the unprecedented challenge posed by the COVID-19 pandemic. From April 6-8, three U.S. […]