Traditionally, heated oils are used in frying foods. They vary from vegetable oil, palm oil, olive oil, sunflower oil to chicken oil and could be used in preparing fried foods and cooked meals. However, there are safe and unsafe frying methods that largely contribute to the well-being of humans.

Staple Nigerian foods like chin-chin, yam, potatoes, chicken, plantain, cakes, and others pose health risks if they are not properly prepared especially in a situation where recycled oil, hydrogenated and unrefined oils with high number of unsaturated fats are used.

Air frying and deep fat frying are the two basic methods of frying foods, each of which, have good and bad sides. We will attempt to analyse both methods and determine the best that should be applied when preparing meals.

What is deep fat frying?

Deep fat frying is a cooking method that can be used to cook foods such as fried chicken, French fries, and potato chips. The process involves submerging a food in extremely hot oil until it reaches a safe minimum internal temperature.

This is the most popular method of frying foods for both commercial and private purposes. A cooking process where heated oils are used to fry foods into desired taste and texture. Though cheaper, it portends greater health risks. Deep fat frying is the most common and conventional method of frying foods, employed in homes, restaurants and the food industry in Nigeria.

Oils, sometimes unhygienic, are used in frying, some are recycled which leads to trans-fat after turning into hydrogenated oil. It is efficient and a widely used method because of its rapidity and mainly, the supply of its unique sensory characteristics which is more appealing and generally acceptable by the population.

What is air frying?

Air frying is a process by which an air fryer which is a small countertop convection oven is used to simulate deep frying without submerging the food in oil. A fan circulates hot air at high speed, producing a crisp layer.

How do air fryers work?

The top section of an air fryer holds a heating mechanism and fan. You place the food in a fryer-style basket and when you turn it on, hot air rushes down and around the food. This rapid circulation makes the food crisp—much like deep-frying, but without the oil.

Air frying is becoming popular and acceptable globally. Nigerians are embracing this method, commonly for private use. Hopefully, air fryers will be produced in bigger capacity fit enough to provide foods for larger crowd.

What are the differences between air fryers and deep fryers? Deep fryers require enough oil to completely submerge the food. Air fryers can use a tablespoon or even no oil at all to cook foods. The oil used to deep fry can penetrate the food deeper, so it would have a thicker and crispier crust. 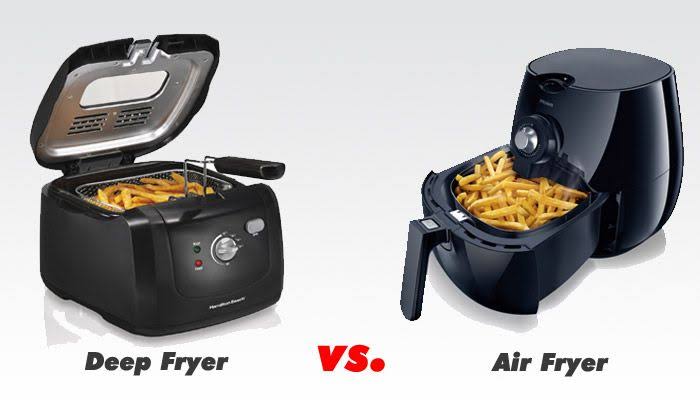 Air frying is healthier than deep fat frying foods. It cuts calories by 70% to 80% and has lesser fatty properties. This cooking method might also cut down on some other harmful effects of oil frying. It is healthier most especially when the amount of cholesterol food breaks down.

The amount of electricity that an air fryer consumes is relatively low. This is in comparison to the traditional oven, deep fryer, and microwave. Low-income households might not be able to afford cooking with an air fryer because a six (6) litre of air fryer costs not less than N35, 000 in the open market and, although, lack of adequate power supply could hinder the process. Air fryers are time-efficient, it saves time and could help in getting food ready without getting hurt.

Meanwhile, for deep fat frying, gas, kerosene, and firewood are required with extra human effort. It takes longer period for foods to be ready and mostly unfriendly to the atmosphere due to the emission of smoke. Splashing of oil and spillage is also a health risk and power supply is not needed to prepare foods.

Studies have shown that products resulting from oils heated for long periods under extreme temperature contains polar compounds such as polymer, dimers, free fatty acids, and acrylamide leading to metabolic changes, mal-absorption of essential fat and development of cancer and cardiovascular diseases.

There is already in place, the Fats and Oils Regulation 2020 awaiting passage into law. When it becomes law, it will help Nigerians and manufacturers to act right on approved guidelines of foods to avoid the consumption of food containing trans-fat.

Executive Director of Corporate Accountability and Public Participation Africa (CAPPA), Mr. Akinbode Oluwafemi recently said, “Government needs to fast-track the passage of Fats and Oils Regulations Bill which will help in regulating the type of oils released to the market.

The onus is on the Federal Ministry of Health and National Agency for Food and Drug Administration and Control (NAFDAC) to save Nigerians from avoidable death and health-wise disaster plaguing them from the consumption of foods containing trans-fat, which has led many to cardiovascular illnesses.”

Also, government needs to improve on the economic status of citizens because poverty is one of the major causes of trans-fat. It is easier to recycle used oil by low-income household – it will be difficult to dispose used oil in a situation where there are no financial abilities to procure fresh oil.
Lekan Ola, a Nigerian journalist, said, “we do not throw oil away in my house. Whenever my wife fries plantain, she will keep the oil to fry another plantain the next time, sometimes the children use the oil to fry potato chips.”

This is a typical mentality and practise of many Nigerian homes.

However, the air frying technology seems to be one that has come to stay as the current context of changing eating habits in the society today calls for attention and constant monitoring, mainly by the food industry.

Since there is no evidence of preventing the use of frying to prepare meals, air frying seems a healthier choice compared to deep fat frying. It preserves the nutrients of foods and may also help in weight management.

• Ogunleye-Bello is an award-winning Nigerian journalist, Author and Gender Advocate. She is the Media and Communications Officer, Corporate Accountability and Public Participation Africa (CAPPA)